A Beijing Olympics thought for the working class in China

Details 08/8/2008 Categories East Asian Culture. News & Views.
Content
So the Beijing Olympics 2008 opened today with a spectacular ceremony on the most auspicious of dates (and times). The event was impressive to say the least, particularly with the co-ordinated groups of energetic dancers, drummers and martial artists.

I'm looking forward to the variety of quality sporting action since the Olympics bring together the most elite sporting personalities in the world. 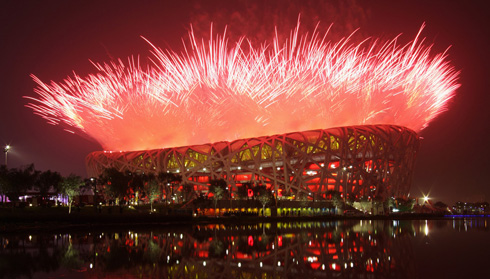 However, with all the action and polished performances given by the Chinese, its easy to play down all the controversy that comes with China's socio and political history and global emergence, regardless of the sometimes frequent reports given by the free speech west.

I personally feel I don't know enough about anything to do with China to speak with any hint of authority, but I'm reading more and more about the struggles of the working class in communist China, who seem to earn a tenth of the average wage in the UK (my very general estimate, but you get the message) and have to face rising living costs.

It appears their income doesn't rise accordingly, and they have very little choice in what happens to them and not many options to improve their lives. They simply can't get another job as easily as we can, no matter how menial the tasks, and they don't have state benefits like we do.

Its a struggle that drives the most tolerant to desperation, and the ones that think they're capable, are driven to risk life and limb travelling to the west illegally for a chance to earn a higher rate per hour. In our terms, that can mean half the wage of a UK local worker, but at one and a half times more hours.

The situation isn't good for alot of people in a nation that houses probably the world's largest ethnic group. Hearing that the Olympics will cost an estimated £20 billion, with £52 million on the opening ceremony alone, just doesn't add up.

Its not a case of justifying the cost or denying a sense of patriotism probably felt by the majority of China's people. Its just a shame that widespread poverty and expenditure of that degree sit side by side.

The 2008 Beijing Olympic games will be a chance for China to prove it's ability on a World stage, but during the entertainment and sporting action, spare a thought for the working class in China whose lives will continue with struggle long after the games finish. 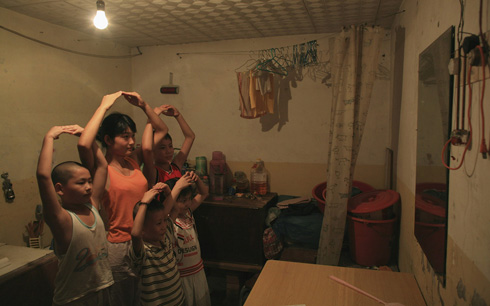 Above : Children of migrant workers from outlying provinces look at themselves in the mirror as they use their hands to form the Olympic Rings after watching the TV live broadcast of the Olympic Games opening ceremony at their quarters August 8, 2008 on the outskirts of Beijing.

The two photos above were from The Big Picture - more are posted on my blog One Inch Punch.