Creative Hong Kong in London exhibition at the Design Museum

Details 07/6/2008 Categories Design & Art Direction. East Asian Culture. Events. Living in London.
Content
I've just come back from the opening reception of the Creative Hong Kong in London exhibition. Its hosted by the Design Museum as part of the "Lates" festival of after-hours art and culture in London and was attended by some of the featured designers from Hong Kong including multi award-winning artist/designer Freeman Lau. 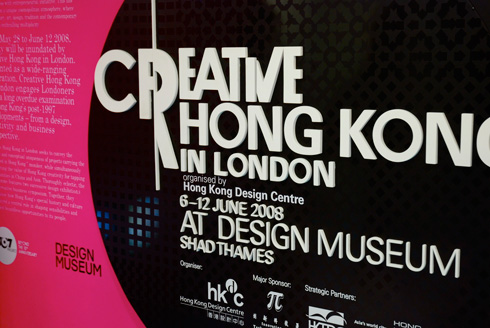 If you get a chance to drop by, its well worth a visit to dip into what's going on across the different fields of design in Hong Kong. You have to be quick as its only on until the 12th June unfortunately. Otherwise, click the link at the end to see a photoset of the show.

Obviously aiming for the UK market, I loved this exhibition for its snapshot of design aesthetics taken from different areas of the culture. Hong Kong residents may wonder at the inclusion of their Octopus smart card, the G.O.D. retail empire, branding for the popular Honeymoon Desserts chain and packaging for Kee Wah Bakery, but its all new for anyone in the UK who's never been there.

Having last visited Hong Kong in 2007, these exhibits were a reminder of not just aspects of visual design, but of the culture and lifestyle there, which I enjoyed immensely during the 3 weeks I spent in Hong Kong.

I often wondered why it took London so long to implement the Oyster card, when the Octopus equivalent was evidently working so well (ten years ago?!). However, an almost daily visit to Honeymoon Dessert for refreshingly cool mangos and sweet tofu amidst Hong Kong's humid climate, drew me to the conclusion that the concept might not work in cold, damp London. 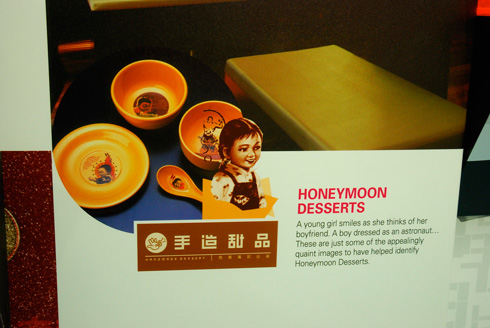 Passing any branch of Kee Wah Bakery also meant that each time I tried to come up with any excuse to buy something as long as it was encased in beautifully ethnic packaging. 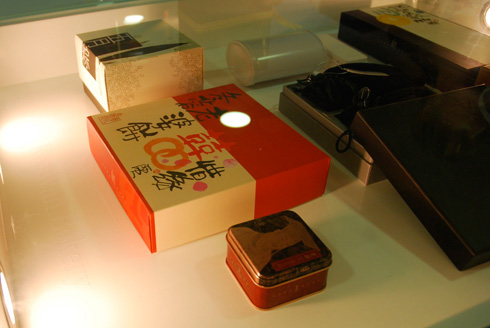 Its probably a cliché to say there's something for everyone, and I think its asking too much to demand anything more exploratory in any of these fields.

However, the show feels to me like it is giving an experience of the design that is happening in Hong Kong right now, when all eyes are on China. The u-shaped space takes visitors from one item to the next, with wall panelling that is sometimes graphically embellished with colour shapes, type and textures.

I'm probably biased in viewing the show, if anything because I love the illustrative graphical sense of Hong Kong design as displayed on the graphically textured layers for the exhibition space (and brochure) and also as seen in the edgey, almost street-style layouts of Hong Kong based IdN Magazine.

I stylise some of my own compositions in a similar way using a particular colour palette and in some ways, I view the style as being part way to understated British design and the brashness of US design. 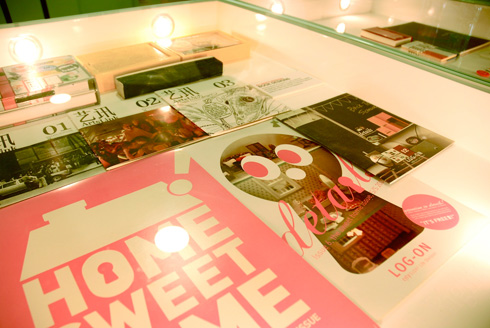 The show also features ten design objects, commissioned by the Hong Kong Design Centre to mark the tenth anniversary of Hong Kong's reunification with China. These are the result of an experiment between ten world-renowned brands and ten globally recognised designers, born and educated in Hong Kong including collaborations between Vivienne Tam and Georg Jensen, Eric Chan and Herman Miller and Gary Chang and Alessi.

If this exhibition is really to give a taster of design in Hong Kong, then time and space allowed, I think it would be fun to explore and present more of the culture in which these display items sit.

Maybe a comment on seemingly the only two pastimes that residents partake of - shopping and eating. Or possibly reflections from the mass market working class on where design fits in their lives - during which they still think its fine to hawk and spit mid sentence. Maybe another time.

Hi there,.. I really like the way you make your design. Keep up the good work, how I wish i could also do things like this in the future. Posted by Dhamphy in Philippines on 22/09/09 at 04:58 PM