Details 08/8/2011 Categories Events. Living in London.
Content
When you read and watch something like the riots in London, you feel frustration, sympathy but also distance. Well, right now, I live at the back of West Croydon station and down the end of my road, the pawnbrokers was torched. It's very close, and never more real than with my ten month old daughter asleep upstairs. 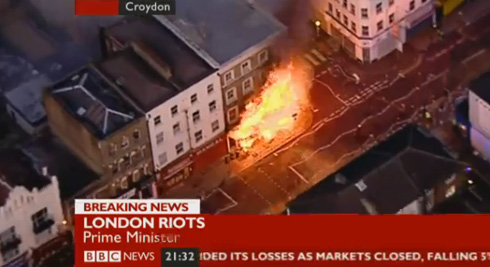 To get home this evening around 8pm, I had to walk the long way around to my street since the main road around West Croydon station was blocked off by riot police. Just a small area mind, and so our street actually became one of the routes that the looters were using to get in and out of the main road. I was closed enough at least to hear the clashes happening. 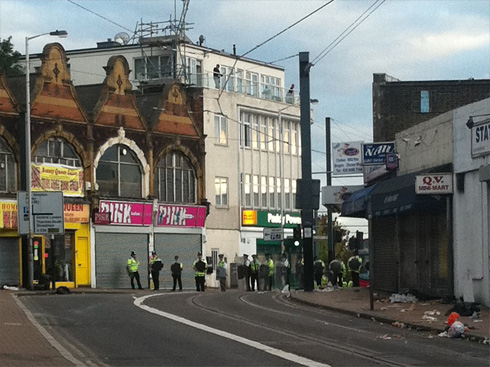 I passed groups of amped up youths, some in masks and watched as cars with blacked out windows (no loud music for once) drove along the street, with the drivers sometimes stopping alongside their mates and taking on stolen goods.

Forget any sense of just cause - these youths were laughing, enjoying their free ticket to materialism and egging each other on. "Don't miss out, bruv".

Youths were heading down towards the main street and coming back with their arms full. A few passed with guitars with their price tags on and I watched from my window as a guy walked passed with his arms full of hair extensions, dropping one as he went. Some stocked their parked cars up and went back for more.

Around 8.30pm, I started noticing the smoke from out of our back window which looks onto West Croydon station. As it slowly worsened, we found out online as we tracked the news sites and Twitter, that the pawnbrokers at the end of our road was ablaze. With the ebb and flow of youths on our road as the evening darkened, mild shock and nervousness at the reality of the riots caused me to start packing some essential items.

The smoke still lingers in my sinuses as three hours later, we're still at home as it quietens outside. The smoke has drifted into a light smudge in the sky and we read about the looters moving onto Purley Way.

Watching the various responses by suits on the news really doesn't help. As residents, we're cowering behind closed doors in our homes, hoping that the looters don't move onto our cars and then our homes. We don't hope for the stores not to be set on fire because it's already happened. These events just exasperate our disbelief and disgust. Disgust at what looks just like pure greed, disregard and a misplaced sense of entitlement of the youths causing the riots. There's no better way to worsen the perception that the rest of society and the police, have on them.

But to hear the deputy mayor stating that they can't afford the army and that there are already enough police on the streets, well, tell that to us residents and business owners all over London. And to warn the looters that they will be caught if they persist? As far as I can tell, they're carrying rather than watching tv's.

If the youths responsible feel they can get away with the looting that's already happened, who knows what else they'll try in the next few days. It so happens that I'll be moving out of Croydon in a few weeks and its a shame that it coincides with the rioting that's happened so far. Judging by the last three days however, nowhere feels safe.

Sounds like bad situation, hope you make it out without too much further stress.

Mail Order Monsters in Shoreditch How useful is the iPhone in my life? Princi : Casual Italian Food in Soho The British Chinese Project website launch Fitting It All In