Details 08/7/2008 Categories Technology.
Content
When I visited the US in May, I had planned to buy Pure Digital's Flip Video Ultra Camcorder. It's basically a low-res video camcorder that looks just like a candy bar phone - in shape and size, but without the phone. Its another device to carry around, possibly made redundant if you have a video facility on your phone.

However, the Flip Video device is a best seller in the US, for several good reasons, price being one of them as it sells at under £100. It has only just begun selling in the UK since June. 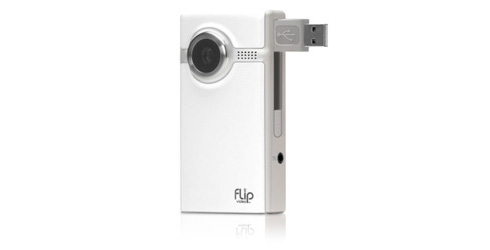 Targeted for convenient integration with sites like YouTube, it's very easy to use with simple buttons flanking a large, red central 'record' button on the back. It's ease gives rise to quick and effortless, spontaneous recording. There's no need to think through your recording options, and once done, you can flip out a usb adapter and transfer files easily to your laptop.

Each record and stop sequence gives you a single file, negating the need to cut and edit footage, although you can do so, with either the included software or something more like iMovie or Final Cut Pro.

The Pure Flip Video Ultra is also AA-battery operated, which although doesn't last very long with continuous usage, does do away with any cords. And these batteries are available anywhere.

So I did get one in the end, having tracked it down in Best Buy. I'm not hell-bent on a path to becoming the next Scorsese, but the concept and spontaneous ease of use did appeal, particularly since there's hardly any explaining to do when passing it to people to use.

Video documenting is nothing new since affordable camcorders have been around for the last decade or so. But with products like the Flip, it heralds a way of life that empowers every day people to digitally document every detail of their life with alot of convenience. You don't have to be a celebrity to do this, but it can make you feel like one.

Video joins a whole host of media channels such as blogging, social networking, Twitter, Flickr, podcasting and even creating your own professionally printed books (e.g. Blurb), all allowing you to express yourself and your thoughts in any which way you desire. Whether the world will follow is entirely another matter, but the cause for this phenomena seems to be the empowerment of self-publishing and self-expression. It's fun!

People like being able to express themselves. Doing so within social networking allows them to stay in touch with friends, make new friends, and feel a sense of community, whilst retaining that sense of individualism that self-expression implies.

Leaving a more "permanent" trail also acts as a substitute for a photo album (a printed book or a personally hosted photo gallery) or a diary (a personally hosted weblog that can also be exported to print) creating a physical sense of memories.

The efforts of documenting our lives in this generation also give way to the notion of passing down this information or knowledge to the next generation, where we perceive that our thoughts and expressions have a more personal and willing audience.

Ultimately, our efforts to record what we do become a way to leave behind a document or a memory of our existence in the world. As if to hope that we've made a difference to the lives around us.

A friend of mine, Jules, is a professional tv producer/director/producer who having bought and was subsequently impressed with the Flip, started the weblog MyFlip.co.uk to showcase what he's been doing with the device. If even professionals are doing it, what are you waiting for?

Check it out at www.myflip.co.uk