Details 26/7/2009 Categories Events. Travel.
Content
In July, we visited Taipei and Seoul. Since it was our first time in either city, it was an interesting and fun experience, but natural phenomena also made the visits more memorable. No less than an earthquake and a solar eclipse. 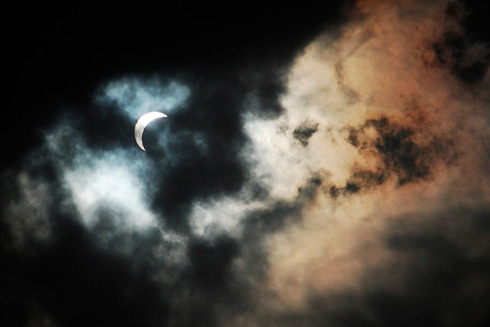 In Taipei, we experienced the earthquake that happened to Taiwan on Tuesday 14th July at 2.05am. With the epicentre off the coast, the magnitude of the earthquake was 6.3, but was only a 3 in Taipei City.

Previously, I'd only felt the vibes off a short and distant quake whilst in London, but this one lasted a good few seconds longer - around eight seconds I think. It was enough to shake our 8th floor hotel room and wake Linh up, startled by the vibrations.

With the city unaffected, it was still apparently the largest quake Taiwan had experienced for a few years. Almost the first thing I did after was jump onto Twitter to check anyone else's reactions and to confirm what we felt.

In Seoul just over a week later, we witnessed our second natural phenomena which was the solar eclipse, occuring on Wednesday 22nd July, at approximately 11am.

As the longest eclipse this century, it plunged parts of India and China in total darkness for several minutes (more photos on The Big Picture), but in Seoul, we only saw a partial eclipse.

We're back in Hong Kong and all we need now is a T8 (or more) typhoon.