Finding Their Political Voice - Article in the China Daily

Details 29/10/2012 Categories East Asian Culture. Press.
Content
It's with a belated sigh and an inbox zero behind me that I can finally post up an entry about an article in the China Daily (a European Weekly - Winner of the 2011 UK Launch Paper of the Year), published back in February. The article, called "Finding Their Political Voice" by David Bartram, is also the cover story for the issue and discusses the development of the British Chinese role in UK politics. 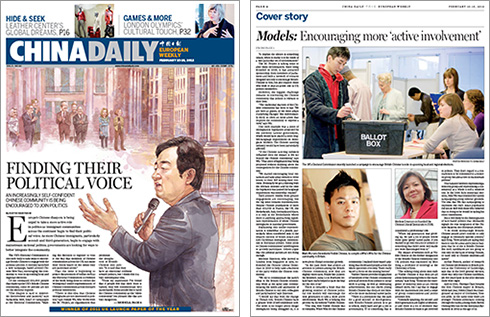 David spoke to a number of representatives of the community including Joseph Wu via The BC Project and Merlene Emerson, co-founder of the Chinese Liberal Democrats, as well as myself and the role that my website Visible Chinese has to play.

Apparently, the story was well received in Beijing with the potential for a profile story in a future issue being discussed with the editor.

The article can be downloaded as a pdf or read on the China Daily website via the following links:

An except from the article about Visible Chinese is below:

There is certainly a hope that the growing number of Chinese political role models will encourage the next generation to take a more active involvement. Mark Wu is helping this process via his website Visible Chinese.

"The idea with Visible Chinese was to compile a Who's Who for the Chinese community. I realized there wasn't anything that showcased people across the whole spectrum of society. There really wasn't a focus on the unsung heroes."

Visible Chinese provides biographies of members of the Chinese community across all sectors from politics to social work to acting. As well as celebrating achievements, the site shows young British-Chinese that they are not limited to the more traditional career paths.

"There is a perception that the path for a good second- or third-generation British-Chinese person is to go to school, study hard and get a job in accountancy, IT or something that is considered a professional role.

"When my generation was growing up, we saw a lot of people follow these quite 'geeky' career paths. If you wanted to go into the arts or politics or something that didn't seem very stable you were discouraged from it."

The impact of websites such as Visible Chinese on the further integration of the British-Chinese community into UK politics was examined by Miri Song, a professor of sociology at the University of Kent.

"The striking thing about sites such as Visible Chinese is that they are all about demonstrating links to the mainstream," says Song. "Some see the emergence of minority sites as an overtly inward move, but I say that to engage with the mainstream you need a sense of group consciousness and public presence first.