Launch of the INQ1 Social Networking Cell Phone in Shoreditch

Details 14/11/2008 Categories Events. Living in London. Technology.
Content
Yesterday, I attended the "VIP" launch of the INQ1 - touted to be the most advanced social networking phone in the world. The thing is, I didn't know this until I got there.

Like the 7th Syndikate scenario, I was contacted via this website as apparently, my blog "covers a lot of relevant themes - examining social media, design, urban living etc." 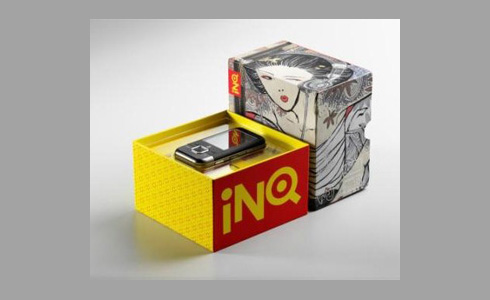 I'm not totally sure about that - I cover what I like really(!), but I can't complain when there is free food and drink and potentially something exciting on offer.

When I was contacted, I had no idea what the event could be for, except for some "new device designed to keep you in social sync more than ever before". I only had the web address DriedonPaper.org.

Turning up close to the event I saw some quite obvious "3" branded signs directing to the launch event. Not being sure this was it, I followed them anyway, seemingly away from where I thought the place was (Shoreditch Studios). After all the mystery, I was a little disappointed that the "surprise" was spoiled so prematurely.

"Dried on paper"? The people on the door has no idea what I was on about, and didn't recognise the invite.

I should mention by the way, that I received an unusual invite through the post which was a huge rubber stamp and ink pad, and I had to print it on the enclosed yellow card.

I walked around Shoreditch a bit more and came across the lovely ladies manning what I think is the main entrance to Shoreditch studios. It was the right address, but they also had no idea what I was on about.

However, they were very helpful, took my invite to confirm with someone inside, and lo and behold, the "mystery" was solved - this was it.

Well, apart from that mishap, the event was the usual Shoreditch affair, with drinks and canapés, music from Disco Bloodbath and The Unabombers and with Hexstatic providing some visuals.

A part of the studios also displayed some art which I think is related to the INQ campaign, and juxtaposed large touchscreens showing the INQ device with shelves of retro objects such as dial phones and globes.

And what about the phone? To be honest, having an iPhone, I can't get excited by what I see in the INQ. One of the INQ staff was on hand to show me around the handset but basically, there didn't seem to be anything new on there that I didn't already have on my own.

However, at £15 a month, the cost compared to the iPhone is like the screen - half the size.

I think if I wasn't wedded to (my contract and) the design touches provided by the iPhone interface and Mac OS, and really wanted connectivity with Facebook, MSN and Skype, then it might be the phone for me. Someone I spoke to however, thought that it seemed like a woman's phone, with its petite size.

Anyway, if its advancement in technology then I guess its a good thing, continually moving the industry along. However, I'm staying with my iPhone - not that I came to choose.

Oh, I wholeheartedly welcome all the pr and marketing people trying to harnass the blogosphere. But at least tell your own staff too!

Update: Link to 3MobileBuzz short article about this article!

However, at ?15 a month, the cost compared to the iPhone is like the screen - half the size.

lol, thanx I spilled my coffee over that comment!

A Beijing Olympics thought for the working class in China Beijing rap meets British Chinese guitar and scratch artistry Top Fives in London and Hong Kong How useful is the iPhone in my life? Dragon Boat Racing