Details 28/12/2010 Categories Made By Mark.
Content
Just before Christmas, I finished the new version of the Chinatown Arts Space (CAS) website. It's actually the first major project I've completed since returning back to the UK in May from my travels in East Asia. 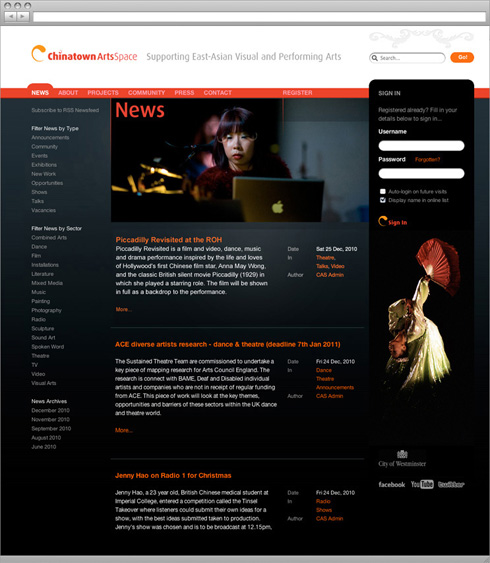 It's by far the most ambitious Expression Engine project that I've developed and quite rewarding because of it. I've been able to really explore and work through a number of challenges in making some areas of the site work, namely the membership profile side and the ability for dynamic content such as the news items, to be loaded up to the front end, edited and saved back to the database.

The CAS website will also be further developed throughout 2011, with greater functionality planned, rather than just refinements to existing features, so I'm quite looking forward to this.

Looking back currently, I suppose the functionality is quite basic when compared to sites such as Facebook that feature profiles heavily, but over the years, I marvel at the ease with which software now allows people like myself - a team of one - to build fully featured websites.

The tally of Expression Engine websites in my portfolio of experience now amounts to seven, and with each site, I become more enthusiastic about the potential of this CMS. I do think free alternatives such as Wordpress have their advantages, but the proprietary tags system that Expression Engine uses is perfect in allowing me to code up my own front end templates and control the presentation of data down to the last character.

Where in the past, an additional programmer was a necessity for every dynamic project, the website development industry has reached a point where briefs requiring high design and functionality but with a more modest budget, can be answered by a designer-scripter like myself.