Details 31/3/2011 Categories East Asian Culture. Made By Mark.
Content
A little after the start of 2011, I finished another Expression Engine CMS based website for IPCN (International Program Content Network), who are an Anglo-Chinese entertainment and media business specialising in the Asia Pacific region with a particular focus on China. 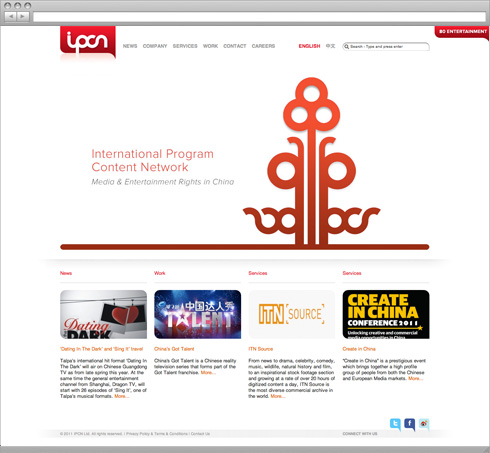 The architecture, visual design and layout were relatively simple as this was the approach my clients favoured.

Initially, the idea of a restrained design for an entertainment and media business website sounds counter-productive. However, it's an approach that is more relevant when considering that the business negotiates rights to a variety of media content between both the UK and China, rather than showcase the content itself. 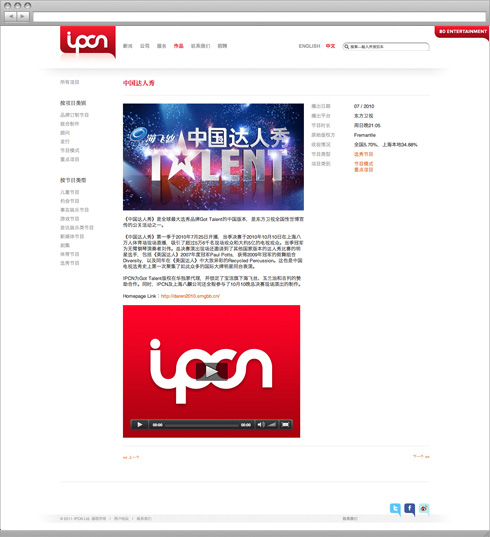 The difference between my use of Expression Engine for the IPCN website and other EE sites that I've designed and built is the implementation of both English and (Simplified) Chinese language.

Multi-lingual, content managed websites can be achieved in a few ways with Expression Engine and of course with content management systems in general, but the most elegant was to set up subdirectories using a country code ("en" for English and "ch" for Chinese) and then using a global variable to monitor which language version to use. Templates to display dynamic content then simply query the global variable first before displaying the correct language content.

It's a solution that wasn't without issues but which generally worked well with little work arounds. Plus, additional languages can be built in with minimum complexity since more country codes can be made up and added to the system.

In difference to a single language site, the only other major consideration was to allow administration of content for both languages and the most appropriate way was to facilitate input of both language versions for each post into a single admin page.

This method has proved to be more convenient for IPCN staff to manage and also poses less of an issue with missing language versions of a piece of content. The alternative was for IPCN staff to create 2 posts - one for each language, which would have been more cumbersome to manage with the way the information architecture was structured.