The 7th Syndikate and how to organise a Private View

Details 22/10/2008 Categories Events. Living in London.
Content
A couple of months ago, I started receiving some bizarre and cryptic emails from a certain Agent Curtis relating to the 7th Syndikate. I'll cut straight to the point since the cover is now blown - the 7thsyndikate ended up being a private view on the 24th September, of the Cold War Modern at the V&A. 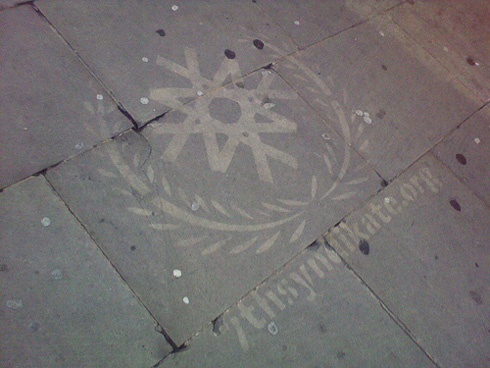 However, I thought this campaign which seemed to be aimed at London bloggers, deserved a special mention because the emails that I got were very close to being spam-like and therefore deleted but were referring to content that I had written, in a meaningful way. This totally caught my eye and interest, and like-wise to a whole host of other bloggers.

I'll be the first to admit that I didn't follow through - I was fazed when faced with a super long html page of copy after about the 5th email. But what I missed was the unravelling of an enthusiastically conceived Cold War style spy plot deserving of the interest it generated on confused and slightly bemused blog sites.

The whole thing seemed reminiscent of books I had grown up with, such as the Hardy Boys and Harriet the Spy. Clues here and there and piecing together fragments of information to deduce the outcome.

People had their suspicions (film premieres, club nights and an assassination attempt on London bloggers) and eventually, they were led to meet up in real life at the Albert Memorial.

Coded dress consisting of a hat, sunglasses and a newspaper under the left arm was compulsory, and the "spys" were to rendevous with a man wearing a tan mac, bowler hat and dark shoes.

Agent Nicolin, unknown to the rest of the group as a plant, received a mysterious text message telling everyone to move around to the other side of the memorial.

Suddenly photographers arrived and started taking pictures of the agents; what could this be about? They would find out shortly as the man in the tan mac had arrived. Leading them past the Albert Hall, he cast suspicious glances back at the group of 25 or so agents following him. Speeding up, then stopping, the agents mimicked his every move which expanded to include arm flapping, slaloming around columns and hat tipping to passers-by. As they entered the South Kensington underpass, the man in the mac played his hand and lined everyone up against the wall. His instructions: line up in a 2 x 2 formation and quick march the rest of the tunnel, occasionally yelling ‘Stop!’, ‘No Talking!’ and ‘No looking around!’ in the very experienced manner of a Drill Sergeant.

After switching to single line formation for above ground maneuvers, the man in the mac led everyone to the front entrance of the V&A ."

Sigh - if only all private view guest lists could be created this way...

iPhone Apps are the New Online Goldmine Rounding Off 16 Months of Travel Can shrinking Meal-For-One portions make you overweight? Graze.com tested : Food delivered to your desk Possessions I need to go travel for a year and possessions I leave behind