Details 05/1/2010 Categories Living in Hong Kong.
Content
Writing my travel blog MangoVine.net, I made a decision to date the posts according to when the experiences described happened, which is preferable for the long term. The problem is that posts won't go up until several months after these actual dates, making it look like the blog isn't being up dated. More importantly, it can also hold up more timely posts. 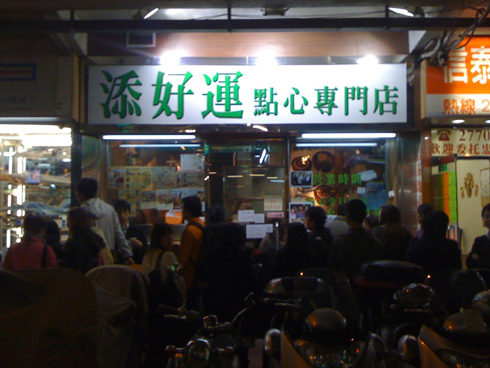 For this reason, I wanted to publicise our recent visit to an excellent dim sum restaurant in Hong Kong, which will pop up on MangoVine.net in a few weeks time. The impetus for posting is that it seemed we were the last to know about this place and I certainly don't want to be the last to post about it.

I came across a ripple of blog posts online about a newish dim sum restaurant in Hong Kong (Kowloon) which had recently been awarded a Michelin Star and of course, Linh and I had to go. Called Tim Ho Wan, the place now seems to be the world's cheapest Michelin-starred restaurant.

If you didn't know it, Michelin ratings range from one to three stars and there are only a few hundred awarded in the whole world. Practically all serve expensive meals.

Tim Ho Wan, which means "Add Good Luck", was started by chef Mak Pui Gor, who used to work at the Four Seasons Hotel in their three starred restaurant. He branched out on his own to serve his exquisite dim sum at bargain prices.

In Mong Kok, the restaurant was easy to find but although we only visited on a weekday early evening, it was already packed full of slow-eating diners and a long queue of hungry guests waiting for a seat. Like a scene out of a cliché book, we observed diners through the steamy window, as they appeared to savour bites out of their dim sum whilst discussing the virtues of their meal. Camera flashes frequently illuminated the interior as enthusiastic snappers clicked away.

Tim Ho Wan is by no means a big place and it can only seat twenty people, hence the queues. The interior is pleasant and is at least far removed from the fluorescent ambiance of a char chan teng. Even the staff are quite laid back.

After arriving, Linh and I picked up a ticket from the front desk (a tiny one right next to the door) and ended up waiting forty minutes outside for our number (which with all things considered, wasn't too bad). Some of the time was spent on creating our food order on a photocopy of the menu we were given.

Once in, we gave in our menu, chose what Chinese tea we wanted and were given a printed receipt with our order. Shortly after, our dim sum dishes began to arrive.

I hesitate to go through everything we ordered, although we did go through the steps of savouring our bites out of the dim sum. The menu was limited, but adequate for a dim sum experience, offering a good selection of steamed dumplings, fried food, rice, congee, noodles and my personal favourites - beef balls and chicken feet.

We also ordered two plates of the Tim Ho Wan speciality - crispy cha siu bao - which come as three per plate. Looking around at the other tables, this is by far the most popular dim sum, and we read that as much as seven hundred and fifty of these are sold per day. In other restaurants, we've known char siu bao (roast pork buns) as slightly larger buns that are white and fluffy, instead of the beige, crispy type served here. See below. 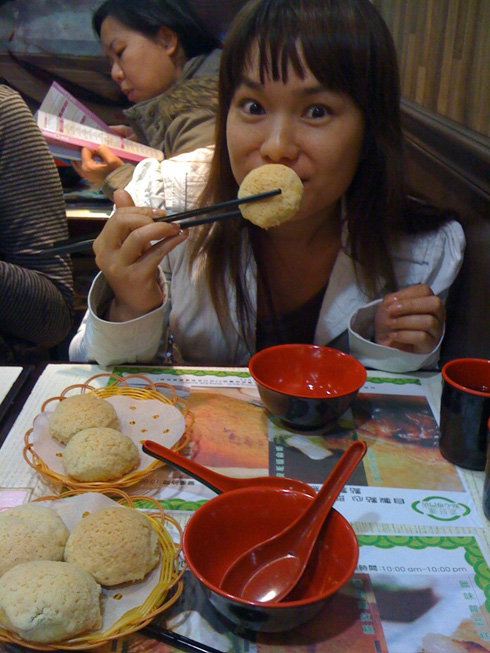 The crispy char sui bao feels a little like a biscuit, but the inside contains some char sui pieces in a caramel-like sauce and is lip-burning hot!

In all, we ordered nine dishes between the two of us and it only cost HK$116 (£9.30)! This made our meal one of the cheapest dim sum meals we've ever had and its also the best tasting too.

Check the address below for visiting. It's open 10am to 10pm, though they seem to stop giving out tickets around 8.30pm in order to close on time.

Eating at Tim Ho Wan requires a bit of time because of the queue. The forty minutes we waited was ok since we had read about a typical one hour waiting time. However, we visited a second time, on a different week day and same early evening time and ended up waiting two hours!

However, we noticed that you can pick up a ticket and disappear for an hour (perhaps into one of the nearby markets) and then return to see the (sequential) position of your number. If it has passed, it seems they'll just let you have the next available table.

Read more on The Age

Collecting Souvenirs How Ebooks are Great Value and Help You Make Money New International Program Content Network Website Get excellent free stuff and discounts by joining mailing lists In London, knowing what your options are, is enough (for me)