Details 31/5/2009 Categories East Asian Culture. Living in Hong Kong. Press.
Content
It's by coincidence that I'm in Hong Kong when its leading English language newspaper, the South China Morning Post, heard about the website I founded, Visible Chinese and contacted me for a short article about it! 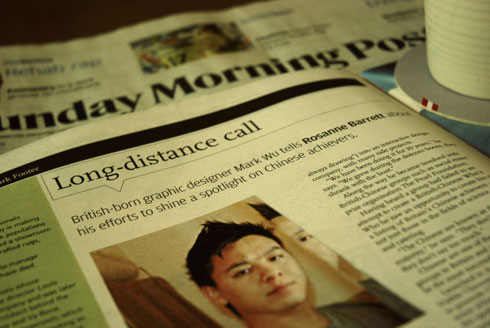 The article just came out today and is actually in their Sunday Morning Post edition, within the accompanying (Post) magazine. I was interviewed for a regular column called "Long-distance call" which features a Chinese expatriate every week, who explains their work and a little of their life story. 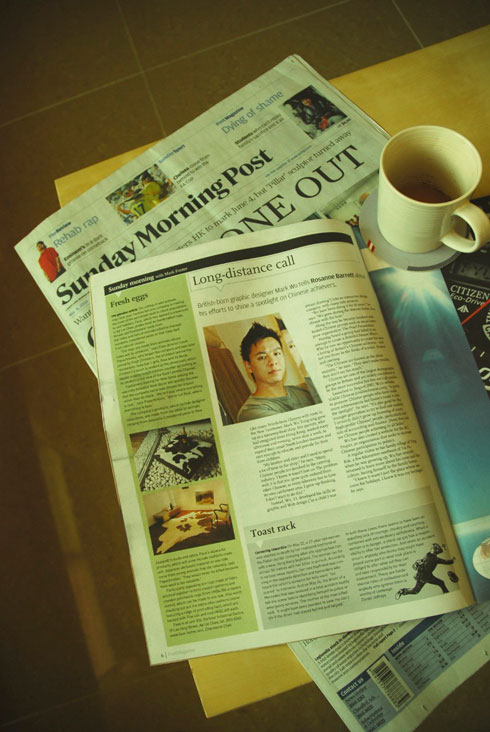 If you're interested, you can read the article below:

Like many British-born Chinese with roots in the New Territories, Mark Wu Tung-Sing grew up in a takeaway-food shop. His parents, who had emigrated from Hong Kong, worked every afternoon and evening, seven days a week, to expand their small North London business and earn enough to educate and provide for their three children.

“My brother and sister and I used to spend a lot of time in the shop,” he says. “Many Chinese people are involved in the catering industry. I knew it wasn’t just us. The problem with it is that you grow quite isolated from other Chinese, as every takeaway has to have its own catchment area. I grew up thinking, ‘I don’t want to do this’,”

Instead, Wu, 33, developed his skills in graphic and web design, (“as a child I was always drawing”), into an interactive design company, with many side projects.

“We have been doing it for ten years," he says. "We grew during the dotcom boom, then shrank with the bust."

Along the way he became involved with British-Chinese groups, such as social enterprise organisation The Pearl Foundation.

Having heard a group had failed in an attempt to create a British-Chinese “Who’s Who” he saw an opportunity to create his own: a listing of Britain's Chinese achievers - and not just those in the fields of science, finance and catering.

“The Chinese are known as the silent majority,” he says. “They don’t make trouble, they don’t say too much.”

Chinese are one of the largest demographic groups in Britain and are widely considered to be the most successful, but few are high profile.

Launched in August 2007, Wu's website Visible Chinese (VisibleChinese.com), "is partly to promote Chinese people who have made some achievements but haven’t made it into the spotlight,” he says. “It’s also good for the younger generation to try to find role models. I certainly didn’t grow up knowing of many [high-profile Chinese] people, particularly outside of accounting and finance. [Now] they can see Chinese people achieving in all fields.”

Wu has also created a website for the BC Project, an organisation that seeks to increase Chinese participation in politics.

A regular visitor to his family village of Ting Kok, a few kilometres northeast of Tai Po, when he was growing up, Wu has recently returned to learn more about his roots and his culture, basing himself in the family home.

“I knew it wasn’t just the place where we come for holidays. I knew it was my heritage,” he says.

ah... now I know more about you. And you have such busy schedule traveling around Asia from HK. Will be interesting to hear insights from you afterward. Posted by Patrick Ng in Hong Kong on 23/06/09 at 09:11 PM


Hi Mark,
I was browsing at patrick's blog and found your link. It's quite funny - at the talk on Saturday, I thought i had seen you before, but actually, i had just read the SCMP that morning and saw your profile.
All your websites are very interesting - so you are on holidays in HK now?

Yes, we're on a year off in Hong Kong, though I am still working here and there online. How I grew up without the internet I've no idea.


An interesting article, thank you for your support Mark in helping to raise the profile of many British based Chinese and in doing so, perhaps setting in motion the cause for a brighter and more hopeful future for young Chinese in the UK.

Tips for choosing a domain name for your business HRH Prince Andrew, Sir David Tang KBE and UK - China Business at the British Library Magazine Wood for the Trees The 7th Syndikate and how to organise a Private View Tim Ho Wan - One Michelin Starred Dim Sum in Hong Kong