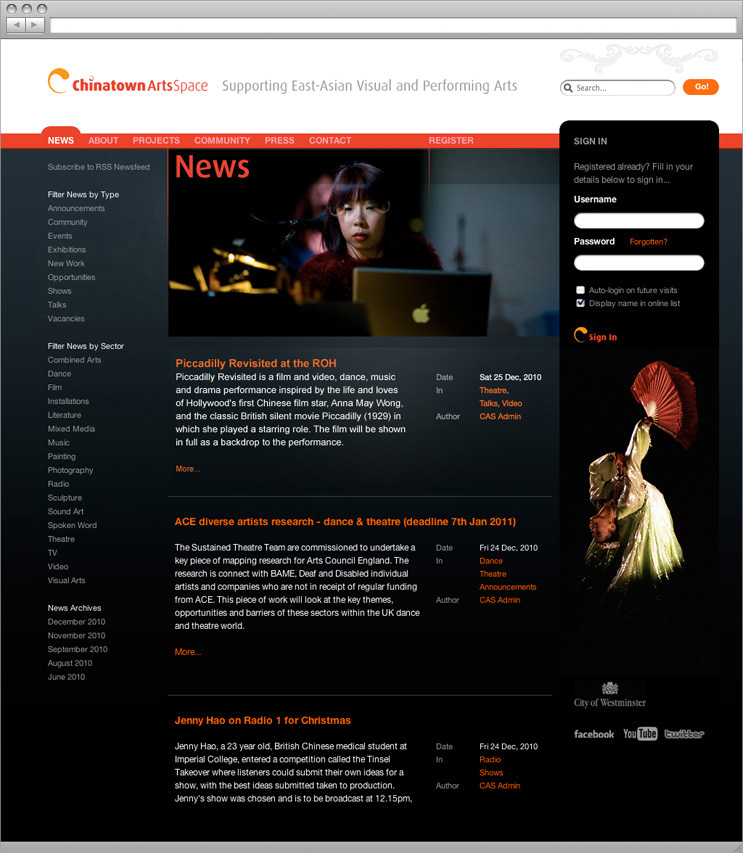 Text
I designed and developed the first Chinatown Arts Space website as part of my company Kibook in 2006, and this version is the second incarnation, which is darker (just visually!) and is more ambitious in its aims.

At launch, this website was fully developed as a membership website that allows artists, audiences and organisations to register and use the site to promote their own profiles and to post their news onto the front page.

Each member had their own web address for their profile, which lists the information that they include (such as contact information, links and their post and comment activity on the CAS website) as well as details of their projects. An unlimited amount of projects could be added by members.

Information about Chinatown Arts Space and past projects are also included from the previous website, which together with all news postings and other content, are fully dynamic and searchable.

Chinatown Arts Space as an organisation were evolving into a hub that served the East Asian visual and performing arts community, helping to connect artists, audiences and other organisations.

The website was key to these objectives and aimed to host the digital media that represented the artists and helped nurture the relationships that developed between them and their audiences.

Although the Chinatown Arts Space website launched in December 2010, it was continually developed with more features added, both with a view to the strategic aims of the organisation and the feedback received from the community.

The CAS website was built with the content management system Expression Engine and utilised a number of add-ons that included Safecracker, User, Freeform, ImageSizer, Twitter Timeline and HJ Social Bookmarks.