Print materials for a new play about numbers, immigration and luck. 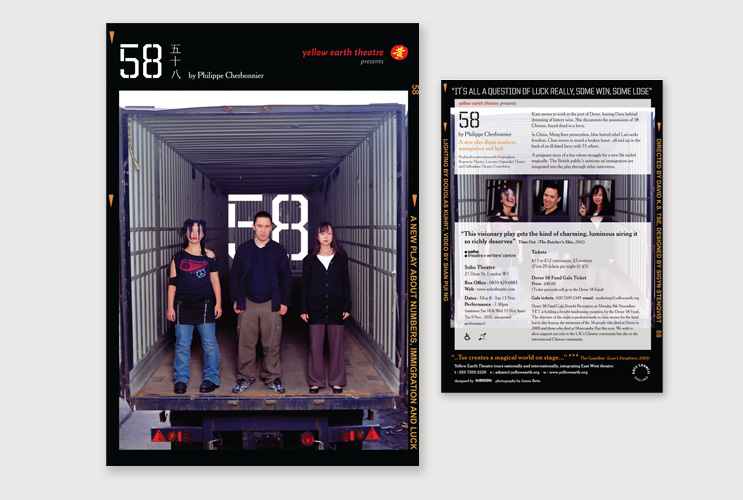 Text
"In England, a Northern couple move to the affluent South East to find employment. She starts work as an immigration officer at Dover.

"One of her first jobs involves cataloguing the clothes and possessions of 58 Chinese, found dead among crates of tomatoes in the back of a lorry.

"Meanwhile, her husband obsesses about winning the lottery and "getting out of here".

"The officer gradually becomes fascinated by the stories behind the objects found on the dead: a chestnut, a bracelet and a Chinese almanac."

An emotional play (based on real-life events) that characterises three of the 58 Chinese. Set in the stark reality of the back of a lorry, the promotional image presents the three characters simply and directly, as if in a police line-up.

Who is the guilty one or are they all innocent, caught up in the promise of fortune in a foreign land?

The design styling of the materials continues the rough and ready feel of the lifestyles depicted, with visual elements overlaying each other like pieces of evidence.

To show happier times, or perhaps to persuade a potential audience to attend a show thats not all doom and gloom, smiling portraits are superimposed over the three character's faces on the back.

Kibook was consistently original, creative and professional. Their quality can be seen in the excellent print generated.
- David K.S. Tse, Artistic Director

+ www.yellowearth.org
+ More on the 58 production