A promotional CD-ROM for a London based British East Asian touring theatre company. 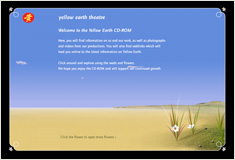 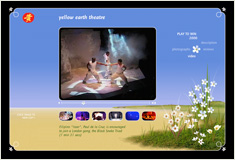 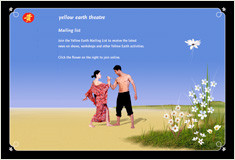 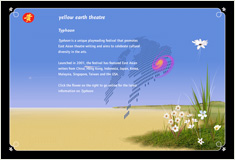 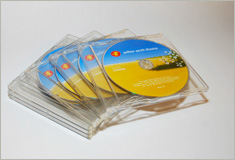 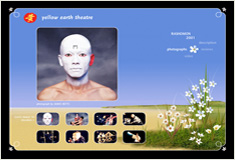 Text
This is a showcase CD-ROM designed and developed for Yellow Earth Theatre. Information, photographs and videos of their work are displayed within a desert landscape, which becomes more lush with vegetation the more their work is explored. Different areas are accessed via a growing flower interface.

The organic interface is particularly relevant in depicting the growth of Yellow Earth Theatre as a company within the last decade (2005 being their 10th Anniversary). Their work seeks to promote East Asian culture and they actively nurture theatre-based skills within East Asian communities and individuals.

I put the whole CD-ROM together in the program Director and implemented lots of detail to give the project life. For instance, there are tiny pixel flies around the flower menu, and the flowers twitch until they are clicked on. The playhead for the video clips are also customised as little flowerheads to coincide with the visual concept.

As a means of promotion, the CD-ROM generated enthusiastic feedback and had been used successfully both in getting the wow factor at festivals and in showing potential theatre venues the quality of Yellow Earth's productions through moving image.